Solar Shading or Solar Control are relatively new terms and differ from Passive Solar Building Design, as they involve the use of mechanical or electrical devices to control sunlight. With passive solar building design, windows, walls, and floors are made to collect, store, and distribute Solar Energy in the form of heat in the winter and reject solar heat in the summer.

In a paper for the Sustainability Hub of the Royal Institute of British Architects (RIBA), Nick Baker: Research Associate, The Martin Centre, University of Cambridge, has written about Solar Control and according to Mr Baker, ‘Daylight and sunlight are a single source of natural energy which we need to allow into our buildings through glazed apertures, as daylight for visual tasks, and sometimes as thermal energy for useful heat gains. Windows, also provide a vital connection with the world outside. However, the energy density of daylight and sunlight varies over a huge range, and it has to be controlled to prevent overheating and glare.’

‘All too often, the control defaults to on/off – that is: if the sun is causing overheating – blinds down and lights on. Artificial lighting is then being used when there is a surplus of luminous energy available. The problem is to modulate it, and possibly to re-distribute it spatially to provide a glare-free working illuminance for a minimum heat gain.’

The issues which arise from a lack of Solar Control in buildings range from overheating as a result of direct sunlight, which when combined with increased energy costs from the use of artificial lighting and air-conditioning to attempt to mitigate against the effects of Solar Gain. 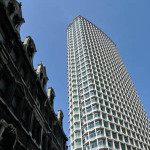 Mr Baker goes on to explain Why Solar control should be used, he states that ‘Solar controls should be considered for all glazed openings exposed to direct sunlight. Solar control is particularly important on south to west-facing facades, since the solar gains will coincide with the hottest part of the day. Solar control is also vital for lightweight buildings with large areas of glazing. Ironically, the modernist buildings of the 60s and 70s were often like this, but didn’t incorporate the ‘encumbrance’ of shading on aesthetic grounds.’

‘There are some mitigating circumstances where it may not be necessary, even for exposed glazing. North facing glazing, receives direct radiation in summer in the UK, but it is very oblique and glass has low transmission at large angles. Heavyweight buildings with small areas of glazing, and low internal gains may be able to cope with little other than curtains.’

The main functions of Solar Shading Devices such as, retractable rollers, shutter, blinds, overhangs, tints, reflective and high performance glazing for Solar Control are to reduce the total amount of radiation entering the room by reflection and absorption and to improve light distribution in the room.

The Carbon Trust have also published a useful guide on Solar Shading Implementation, this publication makes a clear business case for Architects and Building Designers to integrate Solar Shading into new and existing commercial developments. The paper asserts that even ‘on a building with existing air-conditioning, the amount you ‘sic one’ could save on energy bills could pay back the cost on installing solar shading within 10 years.’

The only current statutory requirements relating to avoiding Overheating is Part L of the Building Regulations. Silcock Dawson & Partners have published both a Technical Paper on ‘Avoiding Overheating in Medium and High Rise Apartments’ and a ‘New Part L update 2013‘, the the government published the revised Part L approved documents for new buildings in November 2013 and these are due to come into force 2 months from now in April 2014.

With no universally adopted standard for assessing the risk of overheating in dwellings, other than SAP calculations, architects and designers should carry out thermal modelling in order to assess the  potential for overheating and to establish the best possible methods to mitigate against these effects.

Warema, as a global innovator in field of Solar Shading, have a number of resources to assist those designing and building both homes and commercial buildings. The Warema Architects Network page has a sunshade planning tools, technical documents as well as a dedicated Project Consulting Team who can provide either telephone or on-site project support.

Trade is multi-niche business theme. It comes with hand crafted layouts to help you get your site up an running in no time.